Skip to content
Buy 3 of Any Product, Get 1 Free! - SHOP NOW

Can Olive Oil Protect You Against Dementia?

Can Olive Oil Protect You Against Dementia?

Finding out that someone you love has dementia or Alzheimer’s can break your heart. As the disease progresses, your loved one can forget how to do simple tasks such as go grocery shopping or take a shower. Can olive oil protect you against dementia? A recent link uncovered between olive oil and Alzheimer’s found that the same product you use for cooking could help you beat this and similar diseases.

Dementia is the name that doctors give to specific symptoms such as loss of memory or awareness that are present in patients. Though it does not refer to a specific disease, it is most often a precursor to Alzheimer’s or ALS.

More than five million people in the United States have Alzheimer’s, with estimates claiming that this number will rise to more than 14 million by the end of 2050.[1] Though it is less common, ALS afflicts some 15,000 more patients in the USA each year.  Some think that it only affects older people, but early-onset Alzheimer’s can strike those in their 50s as well. Because it has a genetic predisposition, if you have one or more family members with the disease, you also have an increased risk of developing it, too.

Many people are only diagnosed with dementia after a loved one notices changes in that person. This can include forgetting things such as where they are, who they know, and how to get to places they’ve been. More advanced symptoms may include hallucinations and paranoid or anxious thoughts.

The symptoms related to dementia occur in most people who have Alzheimer’s, ALS, and similar conditions. As the dementia progresses and worsens, it can include symptoms such as:

Before looking at how to use olive oil for Alzheimers, you might consider the seven stages of the disease. Stage one features no visible symptoms. Those in stage two have some memory loss but can still live a normal life. Stage three is when individuals begin making basic mistakes and forgetting simple things. Symptoms progress in stages four, five and six, leading to stage seven where sufferers experience major declines that makes it impossible for them to live alone without help.[2]

If you notice the signs of dementia in a loved one, you should speak to a medical professional. While you can care for a loved one in the early stages on your own, you may need help later. Adding locks to your doors to keep that person from wandering outside in the middle of the night can be helpful in the later stages. Those who work outside the home may need to hire a part-time caregiver, nurse or a home health aide to assist the patient. 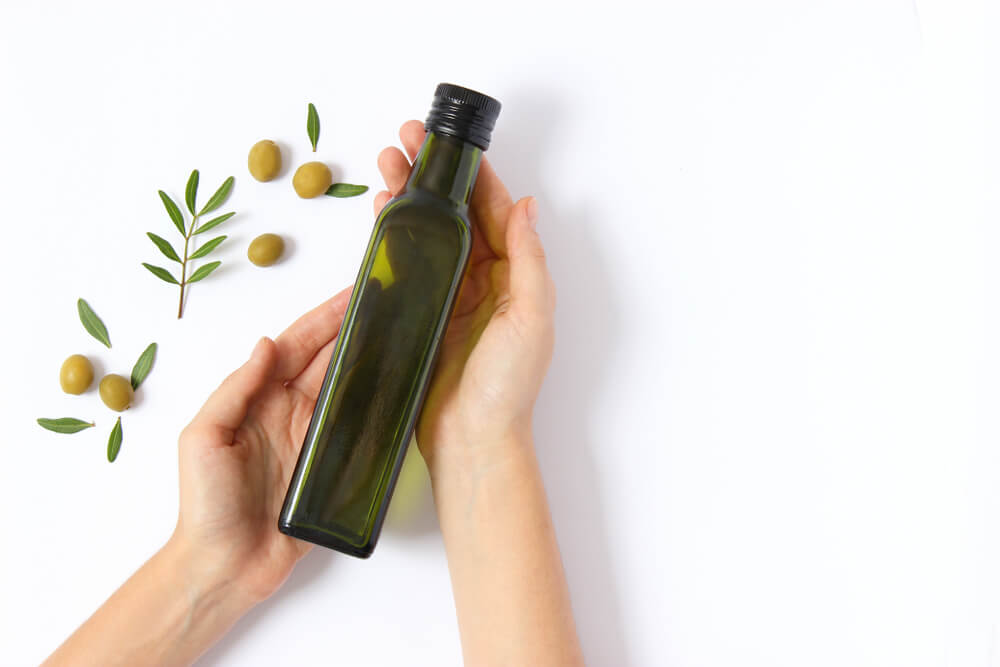 Studies show that the components of olive polyphenols can cross the blood brain barrier membranes – specifically, oleuropein components and the active ingredients of hydroxytyrosol have been measured in the brain.  Therefore, the anti-oxidant properties and the anti-inflammatory properties and benefits of olive polyphenols can be found in the brain for dementia, Parkinsons, Huntington’s and multiple sclerosis.

How to Use Olive Oil And Other Benefits

To experience the benefits of olive oil for Alzheimer’s disease, you need to either consume the extra virgin olive oil in cooking or smoothies or even in capsule form now! Olive polyphenol capsules are particularly convenient and take up less room and still only cost $0.85 per day!   Creative ideas to consume more olive oil in your day can be found here.  You do not need to cook with olive oil to get the benefits.

While the link between olive oil and Alzheimer disease is strong, there are so many heart, joint, and metabolic benefits to reducing chronic inflammation in the body through the consumption of polyphenol-enriched extra virgin olive oil.*  Olive oil also has antioxidants that may help your body fight viruses and certain diseases. Reducing inflammation alone could lower your weight, and your blood pressure, while improving artery and bone functions.

Shop our olive oils and supplements if you’d like to take advantage of this amazing natural inflammation-fighter!

[1]  Alzheimer’s and Dementia Facts and Figures

* Disclaimer: These statements have not been evaluated by the Food and Drug Administration. These products are not intended to diagnose, treat, cure, or prevent any disease.